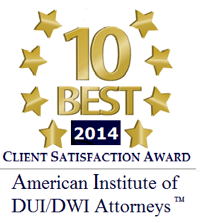 Tuesday, a local guitarist for the popular metal band ‘Bloodiest’ was ordered held in lieu of $200,000 bail for allegedly running over and killing a pedestrian while driving drunk. The 55-year-old musician allegedly struck the pedestrian in the crosswalk, which was witnessed by an off-duty police officer. After initially refusing to consent to a field sobriety test, the suspect later submitted to a breathalyzer and was found to have a blood alcohol level twice the legal limit following the accident.

Driving and drinking do not mix and can result in tragedy. A conviction for DUI in Illinois has serious consequences, particularly if an incident involves injury to people or damage to property. Illinois law mandates that drivers suspected of driving while intoxicated submit to BAC (blood and alcohol content) testing to ensure the safety of all.

In the event you are pulled over under the suspicion of driving under the influence, Illinois law directs consent to a preliminary breath test to establish probable cause of intoxication. If you refuse, you can be arrested and subject to an additional Illinois law that requires you to take a breath, blood, or urine test. Illinois’s “implied consent” law says that if you are lawfully arrested by an officer who has probable cause to believe that you have been driving under the influence, then you must consent to taking a chemical test of your blood, breath, or urine for the purpose of determining your blood alcohol content (BAC). You do not have the right to speak to an attorney before you are tested, and the test must be given as soon as possible from the time when you were last driving.

Refusal to submit to the test may result in suspension of your license and possible penalties. Even if the state does not have proof that your BAC exceeded the legal limit of .08 for those over the age of 21, the prosecution can argue your refusal points to guilt of driving while intoxicated.

If you have been arrested on a DUI charge in Illinois, it is important to get help from an experienced DUI attorney. A conviction for a DUI has serious consequences, especially when someone is injured or property is damaged. Attorney Ronald Bell is recognized as “10 Best Illinois DUI/DWI Attorney” by the American Institute of DUI/DWI Attorneys. Please contact our office today. We can help.